Owning a fine jewelry store in Tucson for over a decade, I get asked many questions. None of them are dumb and I'm always happy to explain and educate you. Gemstone and diamond jewelry buying is not easy, the smarter you are, the better decisions you will make. And frankly, I want you to make the best decisions possible, even if that means not acquiring anything. I've posted several new tools on my website to help you. For example, this explains the 4Cs of diamonds. To learn more, please schedule an appointment here. Since I specialize in color gemstone jewelry I’m writing a year’s long blog on birthstones. This month is Diamond.

What is a diamond? Diamond is the only gem made of a single element: It is typically about 99.95 percent carbon. The other 0.05 percent can include one or more trace elements, which are atoms that aren’t part of the diamond’s essential chemistry. Some trace elements can influence its color or crystal shape. Diamond’s carbon atoms are bonded in essentially the same way in all directions. Another mineral, graphite, also contains only carbon, but its formation process and crystal structure are very different. Graphite is so soft that you can write with it, while diamond is so hard that you can only scratch it with another diamond. Diamond’s unique optical and physical properties give it the highest possible luster of any transparent gemstone. This is called adamantine luster after the Greek word Adamas meaning diamond-like.

Where are diamonds are formed? Diamonds are formed deep in the earth under extreme heat and pressure. It's transported violently upward until it arrives at or near the earth's surface - where it is discovered by nature or man.

How are diamonds mined? Most modern diamond-mining operations are large in scale and extremely expensive. They consist of giant excavations, hundreds of feet deep, and they require the use of enormous hydraulic shovels and massive earthmovers. Many diamond mines are highly mechanized, with miners using sophisticated remote-controlled robotics - not picks and shovels.

The history of diamonds: The world's love affair with diamonds began in India, where diamonds were gathered from the country’s rivers and streams. Some historians estimate that India was trading in diamonds as early as the fourth century BC. The country’s resources yielded limited quantities for an equally limited market: India’s very wealthy classes. Gradually, this changed. Indian diamonds found their way, along with other exotic merchandise, to Western Europe in the caravans that traveled to Venice’s medieval markets. By the 1400s, diamonds were becoming fashionable accessories for Europe’s elite. 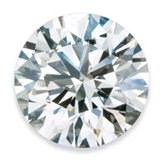 In the early 1700s, as India’s diamond supplies began to decline, Brazil emerged as an important source. Diamonds were discovered in the pans of gold miners as they sifted through the gravels of local rivers. Once it reached its full potential, Brazil dominated the diamond market for more than 150 years.

The story of the modern diamond market really begins on the African continent, with the 1866 discovery of diamonds in Kimberley, South Africa. Entrepreneur Cecil Rhodes established De Beers Consolidated Mines Limited 22 years later, in 1888. By 1900, De Beers, through its mines in South Africa, controlled an estimated 90 percent of the world’s production of rough diamonds.

In the 1870s, annual production of rough diamonds was well under a million carats. By the 1920s, the figure was around three million carats. Fifty years later, annual production approached 50 million carats, and in the 1990s it surpassed 100 million carats per year. World diamond mining expanded dramatically with the discovery of sources in Australia in 1985 and important new deposits in northern Canada in 2000. In the past 50 years alone, scientists have learned a lot about how diamonds form and how they’re transported to the earth’s surface. That knowledge has made it easier to predict locations for new diamond discoveries.

Remember, I'm the jeweler you can trust for diamonds and engagement rings and all styles of fine jewelry. Certainly browse online and then, please schedule an appointment to meet with me. Thanks!