Did you know that as Tucson’s private jeweler, I do everything that a jewelry store does without having the tremendous overhead of a retail store, thus I can save you money? One example of this is in buying and selling gold and silver bullion and coins. Yes, I buy and sell gold and silver bars and bullion frequently, as well as old jewelry and diamond rings. So I thought it would be helpful to explain a bit about bullion, specifically, gold coins. This is the second in a series of blog posts about the world’s most popular one once gold coins: the Canadian Maple Leaf.

Many people consider the Maple Leaf to be one of the world's most beautiful coins, and the Gold Maple Leaf makes a great investment for anyone new to investing in precious metals. Maple Leafs are legal Canadian tender guaranteed by the Government of Canada for its weight and purity. The Maple Leaf was introduced in 1979 and has been in high demand ever since. The coin comes in five sizes: 1 oz., 1/2 oz., 1/4 oz., 1/10 oz., and 1/20 oz. Although the price of gold fluctuates, the popularity of the Canadian Gold Maple Leaf has only increased over time.

The official bullion coin series of the Royal Canadian Mint and the Canadian nation, the Canadian Maple Leaf is one of the world’s most popular coin programs. Introduced for the first time in 1979 as the Canadian Gold Maple Leaf, these were the first coins in the world to rival the South African Krugerrand in terms of gold bullion demand. No other gold coin, aside from the Krugerrand, had ever been offered strictly for investment purposes. 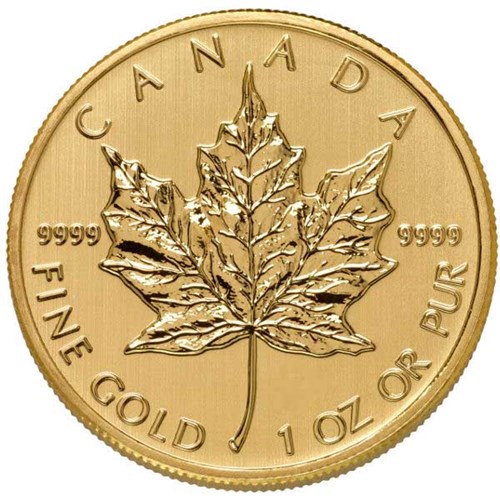 The obverse of all Canadian Maple Leafs, whether struck in silver, gold, platinum or palladium feature the right-profile portrait of Queen Elizabeth II. On the Canadian Gold Maple Leaf, three different incarnations of Her Majesty’s profile have appeared. These include the following used to date:

1979 to 1989 – The image of a 39-year-old Queen Elizabeth II.
1990 to 2004 – A depiction of Queen Elizabeth II at 64 years of age.
2005 to Present – Susanna Blunt’s depiction of Her Majesty at the age of 79.
The reverse of all Canadian Maple Leaf coins features the image of the sugar maple leaf. Used on the reverse since the introduction of the gold version in 1979, this image has never changed. The only additions have been security measures, notably radial lines and a microscopic maple leaf privy.

The Canadian Gold Maple Leaf is so popular that the Royal Canadian Mint has launched numerous variants of the coin, including but not limited to:

The Royal Canadian Mint operated for nearly 70 years with only its original Ottawa coining facility. In 1976, a secondary mint location opened in Winnipeg, nearly 16 years after the government was advised of a need to expand capacity. At one point in time, the Royal Canadian Mint had to turn to the United States Mint to produce circulation currency for the nation. Dating back to 2008, the RCM has averaged 1 million ounces of gold bullion sold annually.

If you would like own this beautiful solid gold coin or any other, or you would like to sell your collection, it would be my pleasure to help you. Simply schedule an appointment for us to meet in the comfort of my Sabino Canyon office.