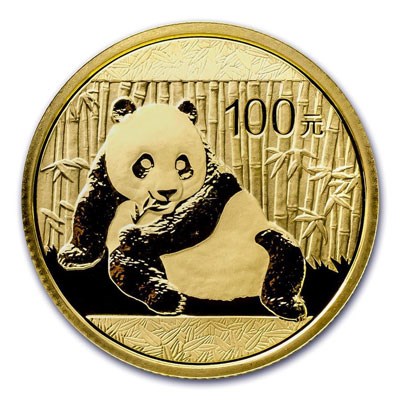 Did you know that as Tucson’s private jeweler, I do everything that a jewelry store does without having the tremendous overhead of a retail store, thus I can save you money?  One example of this is in buying and selling gold and silver bullion and coins.  Of course, I buy and sell gold and sterling silver jewelry and diamond rings frequently, and I also trade in bars and bullion.  So I thought it would be helpful to explain a bit about bullion, specifically, gold coins.  This is the fourth in my series of blog posts about the world’s most popular gold coins: the Chinese Panda.

The Chinese Gold Panda was released by the People's Republic of China in 1982 and are .999 fine gold. The coin is typically available in 1/2 oz., 1/4 oz., 1/10 oz., and 1/20 oz. sizes, however Chinese Pandas are also available in larger sizes. Several mints in China produce the Chinese Gold Panda including Beijing, Shenzhen, Shanghai, and Shenyang.

Gold Pandas are popular gold coins for sale each year from the Chinese Mint. Coins in this series feature weights marked in Grams, rather than Troy ounces, and bear a new design on the reverse side each year.

On the obverse of 2019 Chinese Gold Panda Coins, you’ll find the image of a building known as the Hall of Prayer for Abundant Harvests. The structure is the central piece of the Temple of Heaven complex. The complex was constructed in Beijing between 1406 and 1420.

The reverse side of 2019 30 Gram Chinese Gold Panda Coins includes the design of a Giant Panda. An unofficial symbol of the People’s Republic of China, the Giant Panda is easily recognized with its white-and-black fur and the notable patches of black fur that often surround the eyes of the animals.

2019 is the 38th issue of the Chinese Gold Panda coins.  The most popular contains 30 frams (.9645 Troy oz) of .999 pure gold in BU condition.  It bears a face value of 500 (Yuan) backed by the government of the People’s Republic of China.  On the reverse side is a brand-new design of the Giant Panda.  The obverse face includes the image of the Temple of Heaven complex.

If you would like own this beautiful solid gold coin or any other, or you would like to sell your collection, it would be my pleasure to help you.  Simply schedule an appointment for us to meet in the comfort of my Sabino Canyon office.