Did you know, I sell more color gemstone jewelry than any other jewelry store in Tucson? I am also one of the busiest and most respected diamond engagement ring jewelers in town. I create and customize diamond, ruby, emerald and sapphire rings and bracelets in gold and platinum. I have created hundreds of designs to meet every taste, style and budget. To learn more, please schedule an appointment here. Since I specialize in color gemstone jewelry I’m writing a year’s long blog on birthstones. This month being October, is on Tourmaline.

In the early 1700’s, when Dutch traders returned with gems from Sri Lanka, they called most unfamiliar gems by the Sinhalese name “turamali” meaning “stones with mixed colors.” Thus, practically every gem not recognized as a ruby or sapphire soon became a “turmali.”

Over the last century, science has enabled us to distinguish and classify these gems properly, which included zircons, beryls, chrysoberyls, and garnets, as well as those belonging to a broad species now known as tourmaline.

Tourmaline is a relatively modern gemstone. The gemological boom of the 1970s, when designers began experimenting with new techniques and unconventional settings, helped the world take notice of tourmaline’s beauty and variety.

Tourmaline is mined throughout the world, with the United States being major contributor. During the early 1900’s, Maine and California were the world’s largest producers of gem-level tourmalines. California is known for pink tourmaline and Maine is known for sherbet-colored and mint green-colored tourmalines. Today, Brazil produces the largest volume of this gemstone, as well as the widest color variety for a single location. Nigeria has also seen recent production of tourmaline in unusual colors and sizes. Other smaller regions of production include Afghanistan, Pakistan, Kenya, Tanzania, Madagascar and Mozambique.

The selection of available tourmaline jewelry is as diverse as the gemstone’s color varieties. And because of its abundance of color, size, and quality, the price range of tourmaline is tremendous. Unlike many gemstones, tourmaline’s hexagonal crystal shape is often set into jewelry as-is. Suites of tourmaline stones are often made into matching pendants, earring sets, and beaded bracelets. A favorite of unconventional designers and lapidaries, tourmaline can grace traditional designs alongside diamond, and also be cut to unusual shapes or sizes. The finished product is limited only by the designer’s imagination. 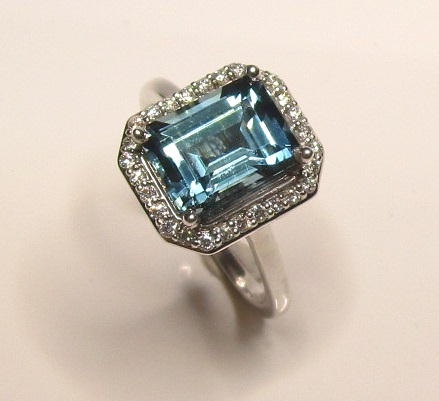 With a hardness of 7 – 7.5, tourmaline is quite resistant to scratching, chipping, and cracking, making it an excellent choice for everyday wear.

Although green is the most common hue, tourmaline naturally occurs in virtually thousands of shades, tones and color combinations—more than any other gemstone. One of the most distinctive features of tourmalines is pleochroism, the presence differing colors or depths of color when the gem is rotated. Because of its strong pleochroism, tourmaline is especially adored by skilled lapidaries, who can cut the gemstone in such a way that it appears multicolored.

While almost all gems are a variety of a single mineral, tourmaline is comprised of a group of minerals. These minerals’ chemical compositions and crystalline structures work in concert to produce tourmaline’s beautiful coloring. Because of tourmaline’s endless color spectrum, most shades don’t have a particular name— they are simply called “pink” tourmaline or “golden” tourmaline. However, there are also some distinct categories: Rubellite tourmaline is a reddish-pink variation often confused with rubies and pink sapphires. Indicolite tourmaline offers hues of minty blue. Stones of the purest blue are particularly sought-after. Chrome tourmaline is a grassy green considered distinct from green tourmaline, due to the presence of chromium. Found in East Africa, chrome tourmaline is rare and usually found in smaller sizes. Watermelon tourmaline is a phenomenon in which a tourmaline crystal has a core of pinkish-red surrounded by layers of white and green. When cut correctly, the resulting stone resembles a slice of watermelon. Paraíba tourmaline, the most expensive of tourmalines, is a copper-bearing, electric blue-green stone. Originating in Paraíba, Brazil, its occurrence is very rare, and it commands high prices. The color of Caribbean seas, Paraíba tourmaline’s most unusual trait is its mystical fluorescent glow.

Nearby is an example of an Indicolite and diamond ring I recently created for a client. So please, when you are shopping Tucson jewelers for color gemstone jewelry or engagement rings or bridal jewelry, think of me. Learn about my pricing and process.