In the privacy of my office, I sell almost as many diamond engagement rings and pieces of color gemstone jewelry in Tucson than practically every other store. As Tucson’s top jeweler, I create and customize rings and pendant and earring in 1K yellow and white gold and platinum. My jewelry store has hundreds of designs to meet every taste, style and budget. You can view some of them here or make an appointment to see all of them here. Since I specialize in color gemstone jewelry I’m writing a year’s long blog on birthstones.

Did you know, Peridot, August’s birthstone’s apple-green hue has been treasured for over 4,000 years. The Ancient Egyptians so adored Peridot that the location of its fog-shrouded volcanic mines were a closely guarded secret. The Romans dubbed it “evening’s emerald” because unlike the deep-green emerald, Peridot’s citrus tones remain constant even by candlelight. In the Middle Ages, Europeans adorned cathedrals with fine Peridot stones.

The fabled origin of Peridot stretches back to Ancient Egypt, on the volcanic island of Zebargad in the Red Sea. Peridot was so treasured by the Ancient Egyptians that they kept the island’s location a secret. With the fall of the Egyptian empire, the island became lost to antiquity, and was only rediscovered in 1906. Since that time, Zebargad’s Peridot deposits have been exhausted.

Trace amounts of Peridot have also been found in Hawaii. Tiny grains of Peridot line the beaches, mixed with sand, and are too small to cut. To Hawaiians, they symbolize the tears of Pele, the goddess of fire. Today, the largest sources of Peridot are the United States, Myanmar, Pakistan, and the Himalayas. 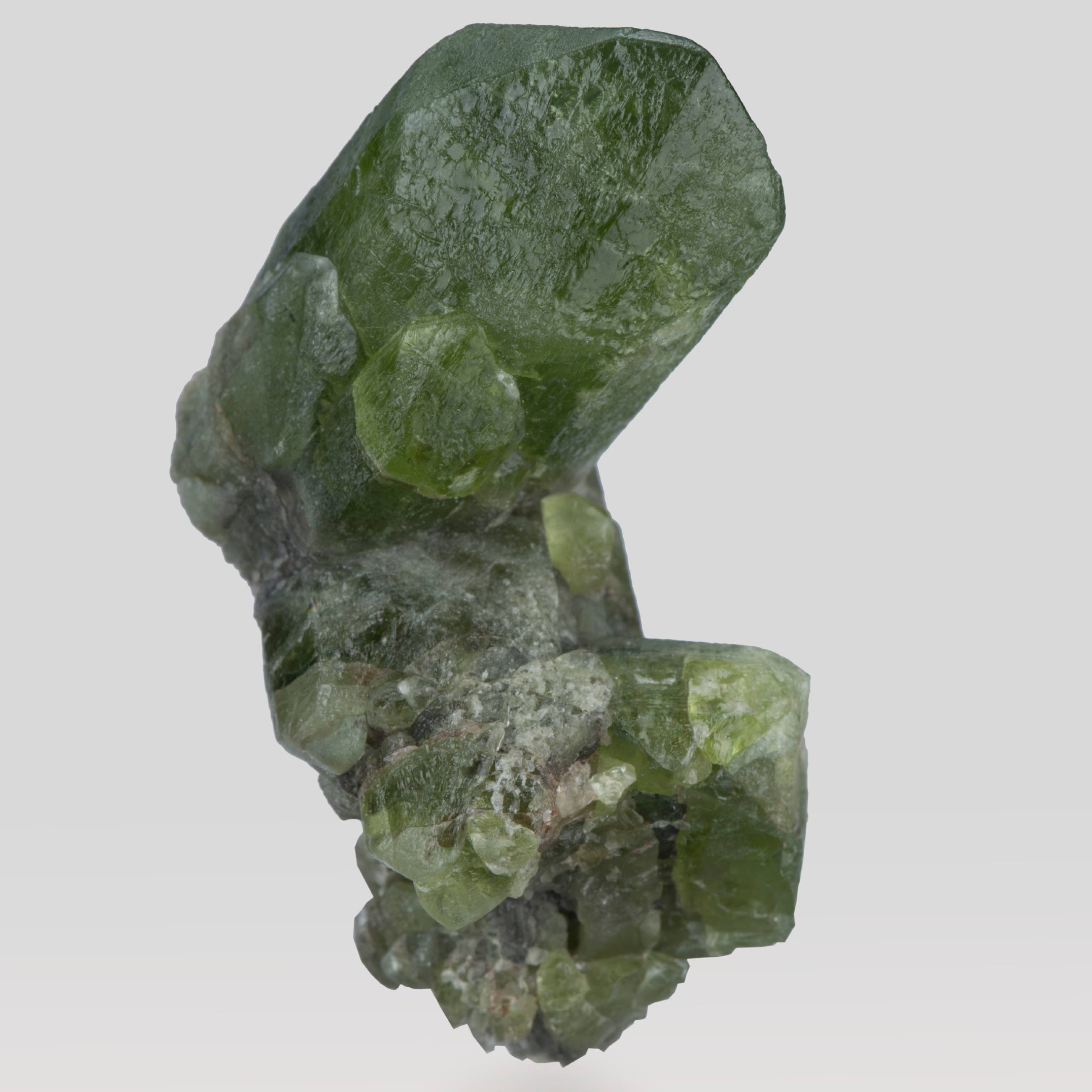 Peridot has a hardness of 6.5 – 7 on the Moh’s scale, meaning that it is a relatively soft gemstone best suited for earrings, pins, and pendants.

Because Peridot is plentiful and often large in size, fine Peridot jewelry can be found in nearly every form imaginable. When fashioned into carved beads, suites, fantasy cuts, or cabochons, Peridot’s versatility makes it a wonderful choice for any collection. Additionally, because Peridot is cut into many various shapes and sizes, designers often build a piece around a spectacular Peridot rather than placing a Peridot into a pre-manufactured setting.

Arizona Peridot is a particular favorite of jewelers. Because of its lemony yellow color and irregular shape, Arizona Peridot is often made into jewelry suites that include a matching ring, pendant, earrings and bracelets.

Peridot’s warmth is often enhanced when set in yellow gold, but its rich apple color also stands out beautifully against sterling silver.

Even in its natural form, Peridot’s distinct green hue is remarkably consistent —a feature seen rarely in gemstones. Peridot is not enhanced or heat-treated to improve its color. Occasionally, Peridot is treated with colorless oils, waxes, or resins to fill voids or surface fractures and to improve the gem’s appearance or surface luster. Any enhancements to Peridot should be disclosed on the gemstone’s bill of sale.

While Peridot possesses a strong and stately appearance, its hardness and susceptibility to temperature mean that it requires special care. 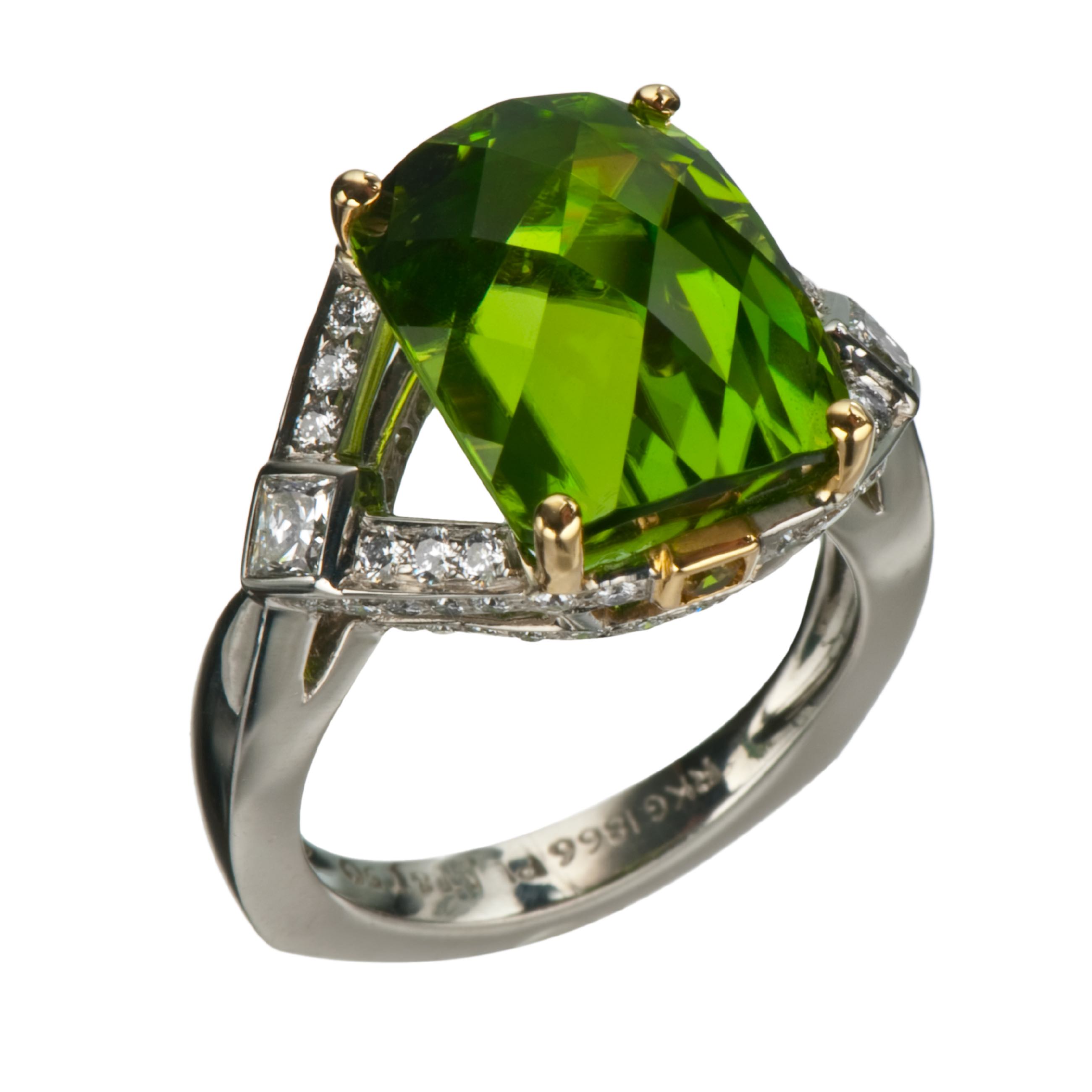 Peridot rings last longer if worn as a fashion wardrobe accessory rather than as a piece of everyday wear. Additionally, rapid and dramatic changes in temperature can damage Peridot.

To clean Peridot jewelry at home, soak pieces briefly in a solution of warm water and gentle dish detergent. Use a soft brush to clean around the setting and restore the gem’s luster. Be sure that Peridot is never subjected to ultrasonic or steam cleaning, as these methods can easily damage the gemstone.

Today, Peridot’s signature green is enjoying a resurgence of popularity in fine jewelry. Capable of making a classic statement or being the centerpiece of fashion-forward pieces, Peridot is fast becoming a modern staple of the gemstone world.

Remember, when you're shopping Tucson jewelers for color gemstone jewelry or diamond engagement rings or bridal jewelry, please keep me in mind and view my two minute video: The Secret: Why Guys Buy Diamonds from MKPJ. And you can learn about my pricing and process.