Did you know, as Tucson’s top jeweler for diamond engagement rings and gemstone jewelry, I can customize rings and jewelry in gold and platinum. My jewelry store has hundreds of designs to meet every taste, style and budget. Please view some of them here and make an appointment to see me here. Since I specialize in color gemstone jewelry and it’s December, here’s my final birthstone blog.

While the legends of some gemstones span centuries, Tanzanite’s story is only a few decades old. In 1967, a bolt of lightning triggered a wildfire that engulfed Tanzania’s Merelani Hills, laying them bare. Passing through after the flames subsided, local Masai herders noticed brilliant blue crystals on the ground. Though the herders had no idea, they had discovered the gemstone’s secret: when exposed to heat, its boring brown color transforms into a thing of beauty.

The gems soon fell into the hands of a merchant named Manuel D’Souza, who mistook them for sapphires. The gemstone stumped jewelers and gemologists, until both the British Museum and Harvard University confirmed that the supposed sapphires were an entirely unknown gemstone. The newly discovered stones were named “blue zoisite.” Tiffany & Company is credited with renaming the gemstone “Tanzanite” after its native country. Since its discovery just about fifty years ago, Tanzanite has become one of the most popular gemstones in fine jewelry, and a well-known birthstone for December.

As its name suggests, Tanzanite comes from only one place in the world: the East African nation of Tanzania. Mined from the Merelani Hills at the base of Mount Kilimanjaro, the Tanzanite deposits lie within a slender strip of ground just five miles wide.

Tanzanite is a attention-grabbing gemstone, with its large range of indigo hues and variety of shapes, each gem is unique. In its untreated form, Tanzanite is a trichroic gem, that is, it shows three colors when viewed at different angles. One direction is blue, another purple, and the other brown. All Tanzanite demonstrates a striking response to lighting. Daylight brings out its true-blue hues, while incandescent light emphasizes its indigo tones. Generally speaking, the deeper blue a Tanzanite gemstone is, the more value it carries. Though Tanzanite is available in large sizes suitable for major rings and pendants, it is frequently set into necklaces or earrings more suitable to its soft nature. 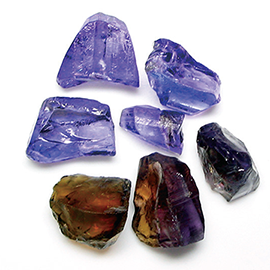 Like opals and pearls, Tanzanite is a gemstone that requires special care. It can easily be scratched if brought into contact with other gemstones. Take care to store Tanzanite jewelry in its own protective pouch to avoid scratching or chipping.

Don’t forget, when you're shopping Tucson jewelers for color gemstone jewelry or engagement rings or bridal jewelry, please keep me in mind and view my two minute video: The Secret: Why Guys Buy Diamonds from MKPJ. And you can learn about my pricing and process.